We show that changes over the past 35,000 y are largely predicted by genetics but also identify specific shifts that are more likely to be environmentally driven.
[…] Here, we directly test whether changes over the past 38,000 y in European height predicted using DNA from 1,071 ancient individuals are consistent with changes observed in 1,159 skeletal remains from comparable populations. We show that the observed decrease in height between the Early Upper Paleolithic and the Mesolithic is qualitatively predicted by genetics. Similarly, both skeletal and genetic height remained constant between the Mesolithic and Neolithic and increased between the Neolithic and Bronze Age. Sitting height changes much less than standing height—consistent with genetic predictions—although genetics predicts a small post-Neolithic increase that is not observed in skeletal remains. Geographic variation in stature is also qualitatively consistent with genetic predictions, particularly with respect to latitude. Finally, we hypothesize that an observed decrease in genetic heel bone mineral density in the Neolithic reflects adaptation to the decreased mobility indicated by decreased femoral bending strength.

Mean body masses for non-Homo taxa range between 39 and 49 kg (39–45 kg if sex-specific means are averaged), with no consistent temporal trend (6–1.85 Ma). Mean body mass increases in early Homo (2.04–1.77 Ma) to 55–59 kg, and then again dramatically in Homo erectus and later archaic middle Pleistocene Homo, to about 70 kg. The same average body mass is maintained in late Pleistocene archaic Homo and early anatomically modern humans through the early/middle Upper Paleolithic (0.024 Ma), only declining in the late Upper Paleolithic, with regional variation.

Combined taxonomic and temporal analyses show that in relation to australopithecines, early Homo is characterized by significantly larger average body mass and stature but retains considerable diversity, including small body sizes. Within later Homo, stature and body mass evolution follow different trajectories: average modern stature is maintained from ca 1.6 Ma, while consistently higher body masses are not established until the Middle Pleistocene at ca 0.5–0.4 Ma, likely caused by directional selection related to colonizing higher latitudes. Selection against small-bodied individuals (less than 40 kg; less than 140 cm) after 1.4 Ma is associated with a decrease in relative size variability in later Homo species compared with earlier Homo and australopithecines. The isolated small-bodied individuals of Homo naledi (ca 0.3 Ma) and Homo floresiensis (ca 100–60 ka) constitute important exceptions to these general patterns, adding further layers of complexity to the evolution of body size within the genus Homo. At the end of the Late Pleistocene and Holocene, body size in Homo sapiens declines on average, but also extends to lower limits not seen in comparable frequency since early Homo.

The evolution of body size and shape in the human career [PDF]
Jungers et al.
Philosophical transactions of the Royal Society B, 2016

The trajectory of body size evolutionin the early part of the human career is reviewed here and found to be complexand nonlinear. Australopith body size varies enormously across both space andtime. The pre-erectusearlyHomofossil record from Africa is poor and dominatedby relatively small-bodied individuals,implying that the emergence of the genusHomois probably not linked to an increase in body size or unprecedentedincreases in size variation. Body size differences alone cannot explain theobserved variation in hominin body shape, especially when examined in thecontext of small fossil hominins and pygmy modern humans.

Morphological variation in Homo erectus and the origins of developmental plasticity [Texte]
Anton et al.
Philosophical transactions of the Royal Society B, 2016

The temporal and regional anatomical variation in H. erectus suggests that a high level of developmental plasticity, a key factor in the ability of H. sapiens to occupy a variety of habitats, may also have been present in H. erectus. Developmental plasticity, the ability to modify development in response to environmental conditions, results in differences in size, shape and dimorphism across populations that relate in part to levels of resource sufficiency and extrinsic mortality. These differences predict not only regional variations but also overall smaller adult sizes and lower levels of dimorphism in instances of resource scarcity and high predator load. We consider the metric variation in 35 human and non-human primate ‘populations’ from known environmental contexts and 14 time- and space-restricted paleodemes of H. erectus and other fossil Homo. Human and non-human primates exhibit more similar patterns of variation than expected, with plasticity evident, but in differing patterns by sex across populations. The fossil samples show less evidence of variation than expected, although H. erectus varies more than Neandertals. 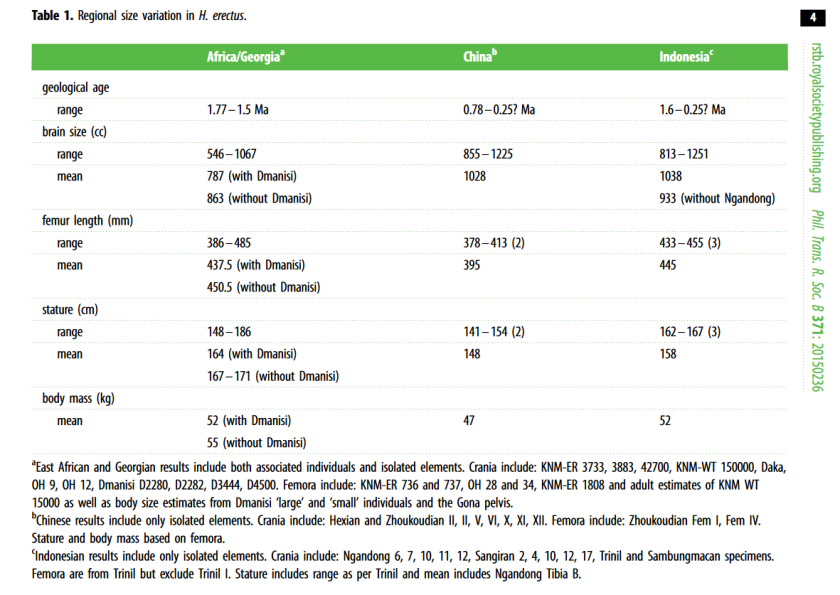 Our results show that many early hominins were generally smaller-bodied than previously thought, an outcome likely due to larger estimates in previous studies resulting from the use of large-bodied modern human reference samples. Current evidence indicates that modern human-like large size ﬁrst appeared by at least 3–3.5 Ma in some Australopithecus afarensis individuals. Our results challenge an evolutionary model arguing that body size increased from Australopithecus to early Homo. Instead, we show that there
is no reliable evidence that the body size of non-erectus early Homo differed from that of australopiths, and conﬁrm that Homo erectus evolved larger average body size than earlier hominins.

Groups living before and after the LGM, Early Upper Paleolithic (EUP) and Late Upper Paleolithic (LUP), respectively, differ significantly in craniofacial dimensions, stature, robusticity, and body proportions. While paleopathological and stable isotope data suggest good health status throughout the Upper Paleolithic, some stress indicators point to a slight decline in quality of life in LUP populations. The intriguing and unexpected incidence of individuals affected by congenital disorders probably indicates selective burial practices for these abnormal individuals. While some of the changes observed can be explained through models of biocultural or environmental adaptation (e.g., decreased lower limb robusticity following decreased mobility; changes in body proportions along with climatic change), others are more difficult to explain. For instance, craniodental and upper limb robusticity show complex evolutionary patterns that do not always correspond to expectations. In addition, the marked decline in stature and the mosaic nature of change in body proportions still await clarifications.

Here, we show that chimpanzee muscle is similar to human muscle in its single-fiber contractile properties, but exhibits a much higher fraction of MHC II isoforms. Unlike humans, chimpanzee muscle is composed of ∼67% fast-twitch fibers (MHC IIa+IId). Computer simulations of species-specific whole-muscle models indicate that maximum dynamic force and power output is 1.35 times higher in a chimpanzee muscle than a human muscle of similar size. Thus, the superior mass-specific muscular performance of chimpanzees does not stem from differences in isometric force-generating capabilities or maximum shortening velocities—as has long been suggested—but rather is due in part to differences in MHC isoform content and fiber length. We propose that the hominin lineage experienced a decline in maximum dynamic force and power output during the past 7–8 million years in response to selection for repetitive, low-cost contractile behavior.