The model simulations document that rapid temperature and vegetation changes associated with Dansgaard-Oeschger events were not major drivers of global Neanderthal extinction between 50 and 35 thousand years ago, but played important roles regionally, in particular over northern Europe. According to a series of parameter sensitivity experiments conducted with the HDM, a realistic extinction of the Neanderthal population can only be simulated when Homo sapiens is chosen to be considerably more effective in exploiting scarce glacial food resources as compared to Neanderthals.

Inbreeding, Allee effects and stochasticity might be sufficient to account for Neanderthal extinction
Vaesen et al.
PLOS One, 2019
https://journals.plos.org/plosone/article?id=10.1371/journal.pone.0225117

Our results indicate that the disappearance of Neanderthals might have resided in the smallness of their population(s) alone: even if they had been identical to modern humans in their cognitive, social and cultural traits, and even in the absence of inter-specific competition, Neanderthals faced a considerable risk of extinction. Furthermore, we suggest that if modern humans contributed to the demise of Neanderthals, that contribution might have had nothing to do with resource competition, but rather with how the incoming populations geographically restructured the resident populations, in a way that reinforced Allee effects, and the effects of inbreeding and stochasticity.

Living on the edge: Was demographic weakness the cause of Neanderthal demise?
Degoianni et al.
PLOS One, 2019
https://journals.plos.org/plosone/article?id=10.1371/journal.pone.0216742

A slight (<4%) but continuous decrease in the fertility rate of younger Neanderthal women could have had a significant impact on these dynamics, and could have precipitated their demise. Our results open the way to non-catastrophic events as plausible explanations for Neanderthal extinction.
[…]Besides, although our study is focused on women, disappearance of males could be linked to women fertility. If little is known about the contribution of Neanderthal women to the retrieval of food resources for the group [84], the male contribution was crucial for the group survival. A significant loss of men due to inter-individual conflicts or during hunting activities would have been of great importance for their physical condition, and hence for female Neanderthal fertility.
Neanderthal reproductive decline could be amplified by Homo sapiens. Neanderthals and Homo sapiens experienced some hybridation […] some mutations present in Neanderthals could have caused infertility problems in male hybrids. Such hybrids with less fertility may have contributed to a slight decrease fertility rate […] Therefore fragmentation of the metapopulation was probably greater, causing a postponement of their demise [99,100]. By reinforcing demographically the weakest populations on the verge of extinction, the migration process decreased the probability of extinction of the overall metapopulation dramatically, as the theory predicts [101]. Obviously, in the absence of migration, the disappearance of the Neanderthals would have been even more rapid and likely […] The effects of decreased survival on the extinction probability and time to extinction are considerable as expected for long-living organisms: a decline of less than 1.5% in survival for the youngest children leads to rapid extinction (less than 2,000 yrs), while a reduction of survival rate as small as 0.4% provokes an extinction time of 10,000 years.

At the end of their existence, the most suitable habitat patches for Neanderthals were small and isolated, and their inferred climatic niche width was statistically narrower than in H. sapiens. This does not mean that climate worsening drove Neanderthals extinct, yet it suggests extinction risk for the latter markedly increased over time, towards its actual extinction date.

At Cueva Antón, Mousterian layer I-k can be no more than 37,100 years-old. At La Boja, the basal Aurignacian can be no less than 36,500 years-old. The regional Middle-to-Upper Paleolithic transition process is thereby bounded to the first half of the 37th millennium Before Present, in agreement with evidence from Andalusia, Gibraltar and Portugal. This chronology represents a lag of minimally 3000 years with the rest of Europe, where that transition and the associated process of Neandertal/modern human admixture took place between 40,000 and 42,000 years ago. The lag implies the presence of an effective barrier to migration and diffusion across the Ebro river depression, which, based on available paleoenvironmental indicators, would at that time have represented a major biogeographical divide. In addition, (a) the Phlegraean Fields caldera explosion, which occurred 39,850 years ago, would have stalled the Neandertal/modern human admixture front because of the population sink it generated in Central and Eastern Europe

We conclude that the environmental effects of the Campanian Ignimbrite eruption alone were insufficient to explain the ultimate demise of Neanderthals in Europe. Nonetheless, significant volcanic cooling during the years immediately following the eruption could have impacted the viability of already precarious populations and influenced many aspects of daily life for Neanderthals and anatomically modern humans.

Our results confirm that the combined effects of a major volcanic eruption and severe climatic cooling failed to have lasting impacts on Neanderthals or early modern humans in Europe. We infer that modern humans proved a greater competitive threat to indigenous populations than natural disasters.

Considerable research links Neanderthal decline and extinction with MIS3 environmental variability, in particular regarding population dynamics during specific Dansgaard-Oeschger (D-O) climatic phases. Consensus exists that Neanderthal populations persisted in southern Europe, particularly in southern Iberia, well after they had disappeared from northern latitudes, and that environmental conditions briefly created a geographic barrier between them and AMH called the Ebro Frontier.
[…] Recent dating methods have shown that ages from many previously dated samples underestimate true ages […] Our assumption is that human adaptive systems, defined here as the range of technological and settlement systems shared and transmitted by a culturally cohesive population within a specific paleoenvironmental framework, can be considered to operate as a ‘species’ with respect to their interaction with the environment. […] This result indicates that only a small part of Neanderthal potential range was exploited during GI8, and that this reduced range was not a result of a contracting suitable climatic footprint, contradicting recent proposals that Early Upper Paleolithic populations reduced their niche due to environmental stress. Our results indicate instead that competition with AMH represents a more cogent explanation for the situation.[…]Our findings clearly contradict the idea that Neanderthal demise was mostly or uniquely due to climate change [51] and looks towards AMH expansion as the principal factor. Hence, we contend that AMH expansion resulted in competition with which the Neanderthal adaptive system was unable to cope.

The new radiocarbon calibration curve (IntCal20) allows us to calculate the gradient of the relationship between 14C age and calendar age over the past 55 millennia before the present (55 ka BP). The new gradient curve exhibits a prolonged and prominent maximum between 48 and 40 ka BP during which the radiocarbon clock runs almost twice as fast as it should. This radiocarbon time dilation is due to the increase in the atmospheric 14C/12C ratio caused by the 14C production rise linked to the transition into the Laschamp geomagnetic excursion centered around 41 ka BP. 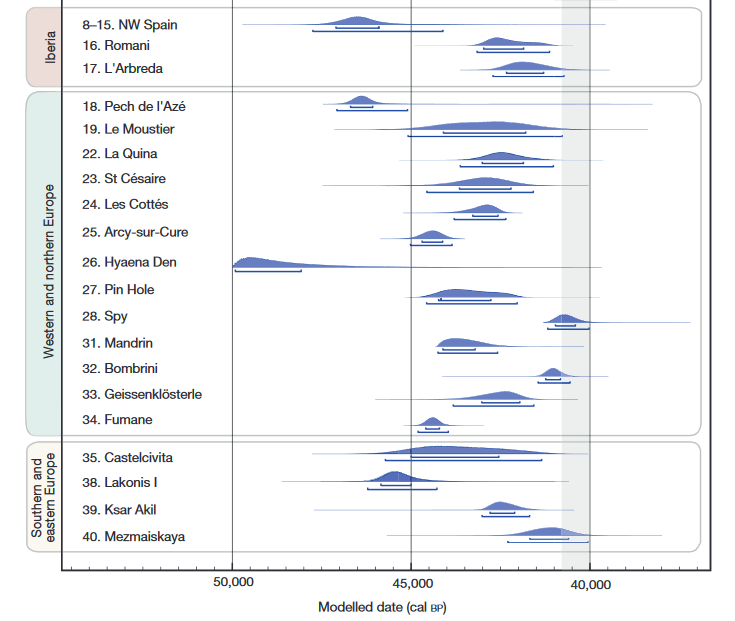