Wisdom is associated with positive life outcomes including better health, well-being, happiness, life satisfaction, and resilience. Wisdom tends to increase with active aging, facilitating a contribution of wise grandparents to promoting fitness of younger kin. Despite the loss of their own fertility and physical health, older adults help enhance their children’s and grandchildren’s well-being, health, longevity, and fertility-the « grandmother hypothesis » of wisdom.

Results from both studies revealed that (even when controlling statistically for age, health, financial resources, and other pertinent variables), post-menopausal women devoted more time to grandparental caregiving. This effect was specific to kin care: Menopause status was not as strongly related to a measure of non-kin-directed altruistic behavior (time spent volunteering).

Here, we test the grandmother effect in resident killer whales, where females can live for decades after their last reproductive event. We show that grandmothers increase the survival of their grandoffspring, and these effects are greatest when grandmothers are no longer reproducing. These findings can help explain why killer whales have evolved the longest postreproductive life span of all nonhuman animals.

Using Geographic Distance as a Potential Proxy for Help in the Assessment of the Grandmother Hypothesis [Texte]
Engelhardt et al.
Current biology, 2019

Caregiving within and beyond the family is associated with lower mortality for the caregiver: A prospective study [Texte]
Hillbrand et al.
Evolution & human behavior, 2017

Results suggest that the presence of older women in a population may enhance population health by reducing mortality among women who face high risk of maternal death, although additional research is needed to determine if this relationship is causal.

Classic theory, involving a one-sex (female) model of human demography, suggests that genes imparting deleterious effects on post-reproductive survival will accumulate. Thus, a ‘death barrier’ should emerge beyond the maximum age for female reproduction. Under this scenario, few women would experience menopause (decreased fertility with continued survival) because few would survive much longer than they reproduced. However, no death barrier is observed in human populations. Subsequent theoretical research has shown that two-sex models, including male fertility at older ages, avoid the death barrier. Here we use a stochastic, two-sex computational model implemented by computer simulation to show how male mating preference for younger females could lead to the accumulation of mutations deleterious to female fertility and thus produce a menopausal period. Our model requires neither the initial assumption of a decline in older female fertility nor the effects of inclusive fitness through which older, non-reproducing women assist in the reproductive efforts of younger women. Our model helps to explain why such effects, observed in many societies, may be insufficient factors in elucidating the origin of menopause.

Alternatives to the Grandmother Hypothesis. A Meta-Analysis of the Association Between Grandparental and Grandchild Survival in Patrilineal Populations [PDF]Strassmann & Garrard
Human nature, 2011

Adaptive explanations of menopause offered thus far turn on women’s long-term investment in offspring and grandoffspring, all variations on the grandmother hypothesis. Here, I offer a very different explanation. The patriarch hypothesis proposes that once males became capable of maintaining high status and reproductive access beyond their peak physical condition, selection favored the extension of maximum life span in males. Because the relevant genes were not on the Y chromosome, life span increased in females as well. However, the female reproductive span was constrained by the depletion of viable oocytes, which resulted in menopause.

Long postmenopausal lifespans distinguish humans from all other primates. This pattern may have evolved with mother–child food sharing, a practice that allowed aging females to enhance their daughters’ fertility, thereby increasing selection against senescence.

A hypothesis for the origin and evolution of menopause [Abstract]
Jocelyn Scott Peccei
Maturitas, 1995

Natural selection favored females who became prematurely infertile, as the escalating cost of raising each offspring led to maternal depletion and made it more profitable in terms of lifetime reproductive success to continue investing in existing offspring rather than attempting late pregnancies. Results of a mathematical model are presented which show that reproductive senescence can be advantageous even when maximum potential lifespan is only 50 years, if the premature cessation of reproduction allows females to moderately increase the survival and fertility of their existing subadult offspring. These findings suggest that menopause could have originated as much as 1.5 million years ago, and that if menopause is indeed such an old trait, it was more likely the result of selective pressure on females to invest more in their own children, as opposed to their grandchildren.

As a life history characteristic of human females, menopause is universal, it occurs halfway through the maximum lifespan of thespecies, and it consistently occurs at approximately age 50 in different populations. Menopause is fundamentally distinct from the reproductive senescence that has been described for a very small number of very old individual alloprimates. Menopause is not a recent historical artifact. As a species universal showing little variation in occurrence across contemporary populations, it must be understood in evolutionary terms. Supporters of the “grandmother hypothesis” explain menopause as a n adaptive feature in itself. Others see menopause as a byproduct of the increased lifespan ofHomo sapiens. Plieotropy theory may help to explain menopause in broader mammalian terms.

Ache data do not support the proposition that females can gain greater fitness benefits in old age by helping kin rather than continuing to reproduce. Nevertheless, one crucial parameter in the model, when adjusted to the highest value within the measured 95% confidence interval, would lead to the evolution of reproductive senescence at about 53 years of age. Further investigation is necessary to determine whether the kin selection hypothesis of menopause can account for its current maintenance in most populations.

Sievert argues that as the human lifespan potential became longer and longer, the female body did not simultaneously evolve to make enough eggs to keep up. The maximum potential lifespan, therefore, grew to outpace egg production.

Evolutionary stories like the grandmother hypothesis are easy to construct from mathematical models, but how well do they reflect reality?

Big game hunting provided very little calories. It was the ancestral grandmothers gathering roots and berries etc who provided the bulk of calories for the diet. This is the Grandmother Hypothesis. 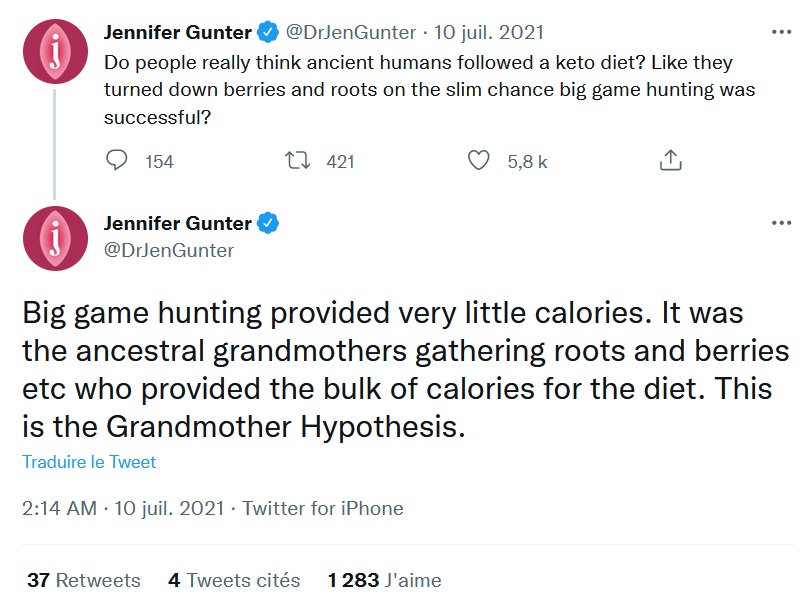 The grandmother hypothesis which posits that female homo sapiens go through menopause to help ensure the reproductive fitness of their daughters is just fascinating https://t.co/wZ9wzPjs5t