Hunting with projectile weapons (e.g., arrows and spears) is usually engaged in by men, large-game hunting being their almost exclusive domain (Hawkes et al. 1997; Kaplan and Hill 1992; Murdock and Provost 1973; Webster 1981). Relying on stationary implements like traps, snares, and nets, women’s involvement in the capture of small prey is nonetheless frequently encountered. Such meat procurement by women occurs among the Bushmen (Silberbauer 1981), the Aché (Kaplan and Hill 1992),the Tiwi (Goodale 1971), the Chipewyan (Jarvenpa and Brumbach 1995), and the Matses from Peru (Romanoff1983). […] This does not mean however that women are unfit for hunting medium-size and large game, wielding the same weapons as men. Women engage in such hunting among the Agta (Estioko-Griffin and Griffin 1981,1985) as well as the Ojibwa(Landes 1938) and the Kaska (Honigmann 1964) from North America. What is more, these women have significant success. 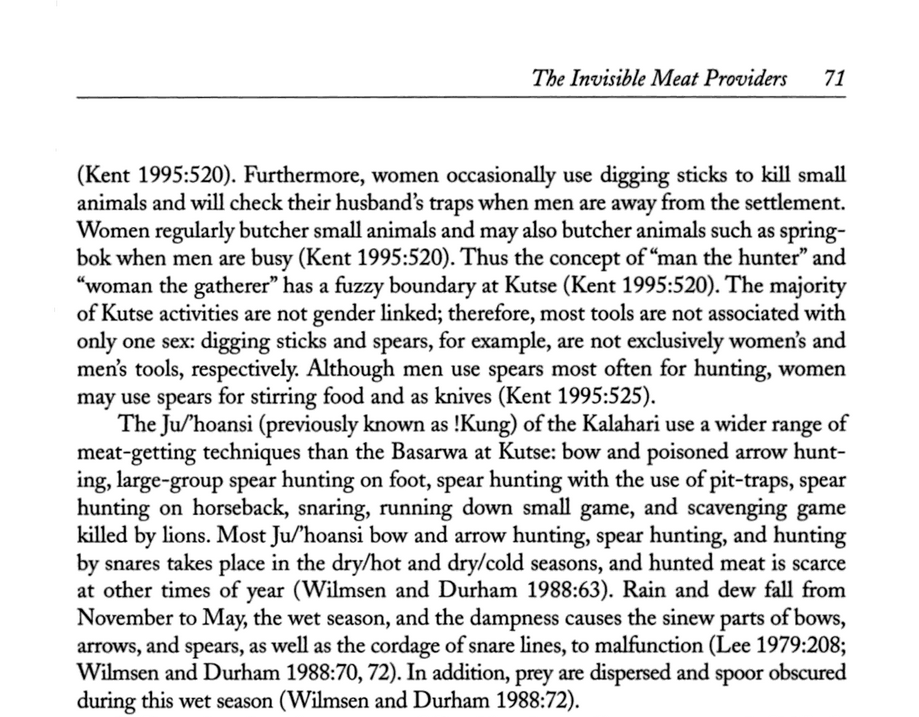 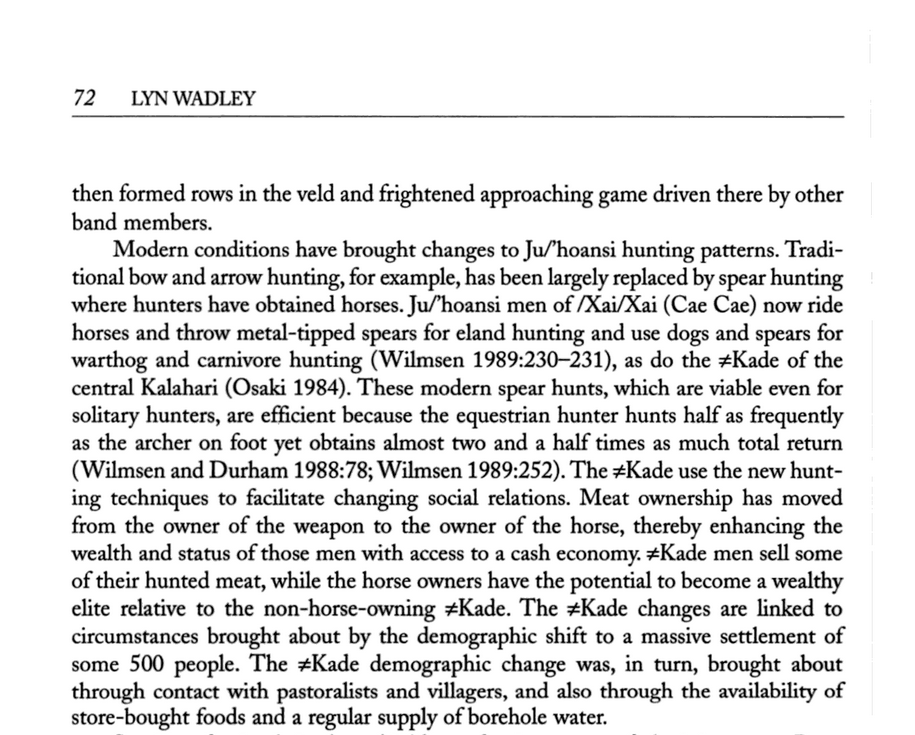 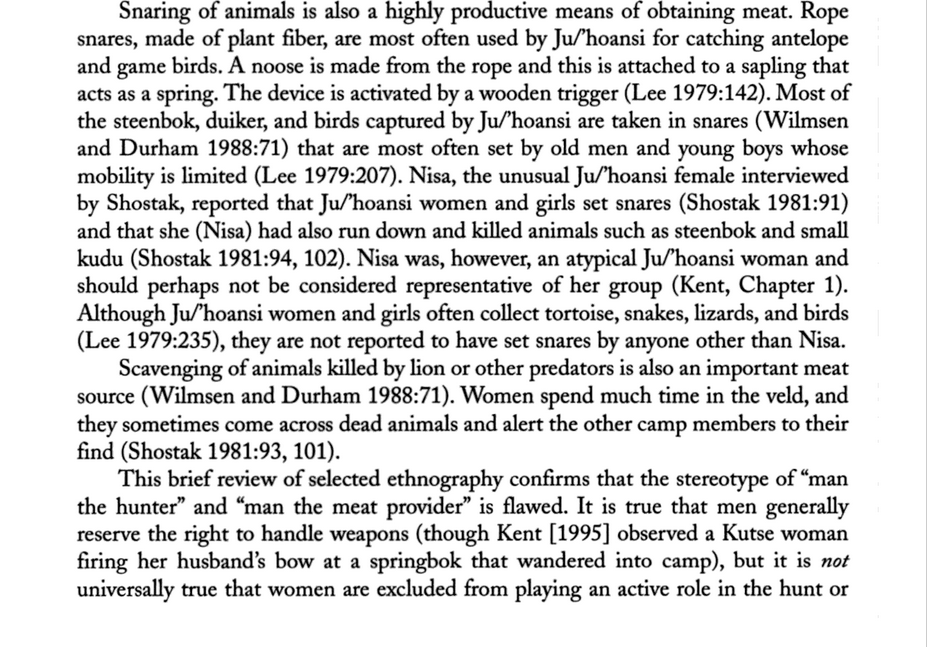 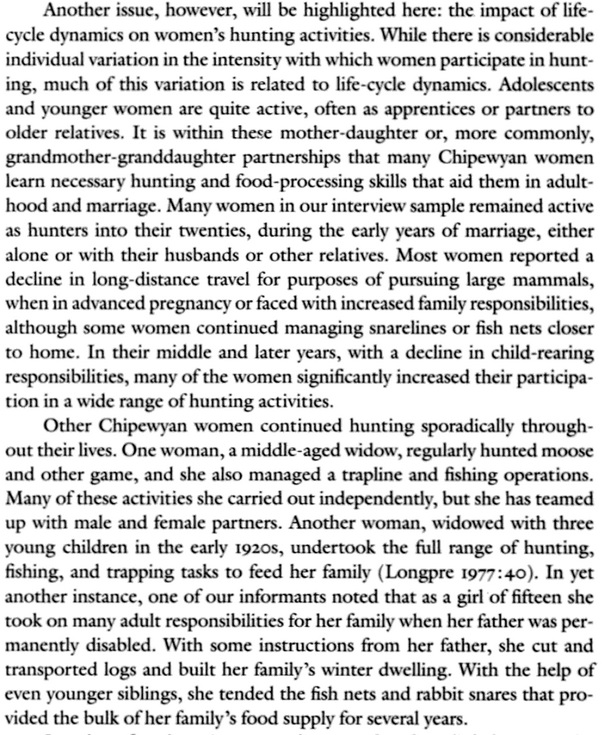 The Compatibility of Hunting and Mothering among the Agta Hunter-Gatherers of the Philippines [PDF]
Goodman et al.
Sex roles, 1985

A Cross-Cultural Analysis of the Behavior of Women and Men : Implications for the Origins of Sex Differences [PDF]
Wendy Wood & Alice H. Eagly
Psychological bulletin, 2002 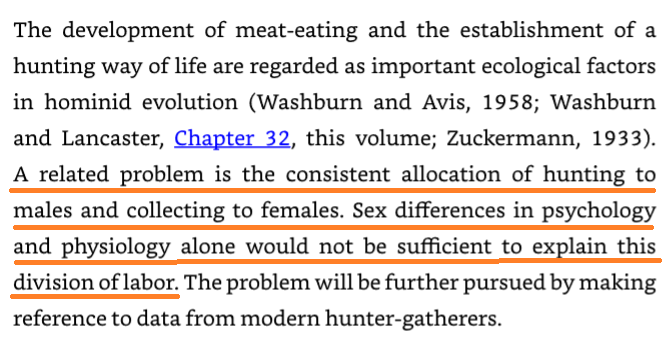 The signaling model suggests that women avoid hunting because it provides low unpredictable payoffs. We have shown that hunting yields comparable or higher caloric returns and more favorable nutrient content than collecting in several societies. The Agta of the Philippines are often cited as evidence that women can hunt as proficiently as men, despite encumbrances of childcare. In fact, many forager women, including Ache and Hiwi, participate in hunting activities. However, women rarely make kills of medium-sized or large game; instead, they engage in activities that help men hunt successfully. In contrast, Agta women hunt with bows and arrows and kill the same prey as do men. The Agta data are important because they indicate conditions under which women may actively hunt. However, fewer than 100 Agta women claimed to have ever hunted from a population of about 9,000 on Luzon Island (P. B. Griffin and T. Headland, personal communication). Most women who reported having hunted were no longer hunting during the ethnographic observation period, and most late-twentieth-century Agta had never heard of women hunters (P. B. Griffin and T. Headland, personal communication). Hunting production data exist for a sample of only six women hunters (Goodman et al. 1985), and available data suggest several patterns relevant to women’s hunting: (1) carbohydrate resources provided low returns and were rarely encountered; (2) meat was traded for carbohydrates at a favorable rate; (3) fertility and ratios of dependent children to adults were low, with high availability of alloparents; (4) women who hunted were often sterile or postre productive; (5) all women’s kills resulted from hunting with dogs; and (6) women’s hunting always took place less than 5 km from camp, allowing rapid return to dependent offspring (Estioko-Griffin 1985, 1986; Goodman et al. 1985). The first three points may explain why African Pygmy womenparticipate in communal net and bow hunting activities. Dogs immobilize Agta prey, perhaps explaining why they regularly dispatch prey without men whereas Hiwi and Ache women rarely do. No study of Agta women hunters has examined whether active hunting is related to women’s reproductive status at the time of hunting, but anecdotes suggest that women hunted infrequently or not at all when pregnant or lactating (Estioko-Griffin 1986, 42).14
Brown (1970) proposed that women do not hunt because it is incompatible with childcare demands rather than because of strength demands or physical constraints such as endurance or spatial abilities (see also Hurtado et al. 1992). Keeping offspring alive is a top priority for forager women, and it precludes hunting in most environments. Nursing women adjust gathering rates according to the age of the youngest child with them at the food patch, and as infant age increases, collection rates increase substantially (Hurtado et al. 1992). Mothers obligatorily care for infants because on-demand lactation occurs frequently throughout the day. Women would often lose prey were they to interrupt hunting pursuits to meet immediate childcare demands. Infants cry and fuss for many reasons, and failure to react to distress calls lowers infant viability. The situation is quite different for sessile-collected resources and some small vertebrates, where pursuit can beinterrupted at any time without loss. Hunting is also dangerous for infants because of long distances traveled under arduous conditions and dangers inherent in rapid burst pursuits. Males experience higher accident rates than females among Ache foragers (Hill andHurtado 1996) and higher death rates from animal attacks and snakebite among Tsimane (Gurven, Kaplan, and Zelada Supa 2007). Because maternal loss is more detrimental than paternal loss (Sear and Mace 2007), women may be more averse to risk of injury than men. Finally, successful hunting requires at least 15–20 years of experience to obtain maximum return rates. Boys who miss sensitive-period skill development rarely become proficient hunters (Gurven, Kaplan, and Gutierrez 2006; Kaplan et al. 2000; Walker et al. 2002). The steepest gains in men’s hunting returns occur during the years when women experience high fertility and are constrained from hunting. This may explain why postreproductive women, free from childcare constraints, do not hunt in most societies.